Who Cries For The Humans of Marvel?

Be vigilant humans of Earth, I'm thinking of you.

As if the Marvel Universe didn’t have enough super-powered people running around, from out of the Terrigen Mists comes a whole new class of powerful people.

I know, I know, you remember when Marvel was like “We got too many mutants, let’s drop it to around 200. Kill ‘em ALLLLLL!”

So, why start another class of ultra humans? Why now?

See chums, The Marvel Movie-verse needs their own “born-gifted” types and mutants are locked in at FOX for the long haul. And since the Inhumans are part of Marvel’s long term, overall Movie-verse plans, why the hell not?

So, starting soon in their comics. Marvel will be painting these new “freaks” in a similar outcast, discriminated-against manner as mutants and The X-Men.

And as much as this news is great for fans of Inhumans, it's the regular humans of Marvel who I can't stop thinking about...


I can’t say I’d blame the un-powered humans of Marvel earth for fearing all the walking, talking weapons of mass destruction that are seemingly just everywhere. Consider: Hundreds (more?) of powered mutants, Hundreds (more?) of otherwise powered heroes and villains, plus all the non powered heroes/villains, and pantheons of Ye Olde Gods, plus giant organizations of good (S.H.I.E.L.D., S.W.O.R.D., others, etc) and evil (AIM, Hydra, The Hand, others, etc.) …and don’t forget, numerous alien races.

Remember, all of these factions, as individuals or as groups, are constantly at battle. Endlessly. Their Infinity Invasions and Secret Gauntlet Battles destroying cities, wreaking havoc, injuring and killing innocent bystanders but rarely each other. Regularly putting the entire world, sometimes the universe and/or the fabric of space and time, at risk. Bare in mind this is the stuff we SEE - presumably all this goes on a world wide scale, not just in east coast America.
And how does the "official" appearance/arrival of not only aliens but certain "gods" affect the religions of the world and those who follow them? That aspect alone would send the real world into a frenzy.

So all in all, can you blame them for being fearful? 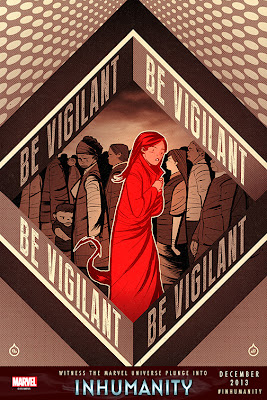 Now into this mix, add new heroes and villains all empowered by the Moon Mist of the Inhumans and the world starts to seem to shift for the humans living in the M.U., they are no longer safe.

They haven’t been in a long, long time.

If you lived there could you differentiate between them all? Would you try? Or even care to? All the Super-Powered-Beings would start to blend together. You really would’nt care about where a person got their power anymore. Mutant, Inhuman, Lightning Strike Victim - whatever -  if they have powers or regularly get into skirmishes with powered people, they are all threats to you and your family.

Marvel (especially M.U. NYC) seems like a war zone where everyday one wonders from which direction the shots will come from and instead of bullets or bombs, it’s optic blasts, it’s a city bus thrown by the Hulk, it’s an alien horde, it’s entropic entity from the other side of the galaxy.

In a world like that, without a superpower of your own, you may feel defenseless and in a constant state of threat, fear and impending doom.

Marvel needs a book from this perspective. I’m not talking about genocidal maniacs and the bigots. Or vigilantes with a Lost-Love motivation. I mean a book about The Unpowered Human, and the fear they live with in a batshit crazy Marvel Universe.

A human who can’t cope with all this around them and what they decide to do about it?