So, while you were cleaning out the basement (by that, we mean moving the bodies) because you have company "staying" for the holidays, these things happened:

Our very own NotSoCrazy. Pseudo-journalist. Pseudo-politician. Pseudo-schizophrenic. Bona Fide Published Writer! His short story "SEPTIC" is available NOW for your reading pleasure in "Thadd Presley Presents... CREATURE FEATURE". We asked our friend to describe his tale...


"Septic is a classic tale of "what you get you don't want and what you want you don't get." All of that stemming from some crap growing in a guy's backyard septic tank."

Sounds good to us. Available from.... Lulu.com

• This effects test from the Sam Rami Spider-Man days popped up at a few sites and it shows that at the very least... they tried. And very well too, so it's only speculation as to why they went the other way.

• Oh, you've always wanted to make your own comics, but you can't pencil, ink, letter and color? or can't hire the people to do it....Well, maybe you should check.... Pixton.com

• Regular TV shows too long for you? Sit back, relax, watch a little... GIF.TV

• Wonder Woman and friends check for lumps. Not as sexy as it sounds... BoingBoing 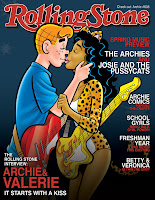 • Chris Hardwick has a chat with JJ Abrams over at... Nerdist

• The Riverdale kids are at it again. Archie is into female African-American Musicians that dress up as animals.... ComicBookResources / UsaToday

•  Dark Knight Rises stuff:
The first six minutes of  TDKR is showing at Imax's with MI4: Ghost Protocol. All anyone is talking about is that BANE is intentionally hard to hear...  EW.COM
Don't worry there's help available.... BleedingCool
Nolan explains the choice of Bane...CBR

•  Old heroes don't die, they just end up in EXPENDABLES 2

•  Nick Cage, back in the hot seat! Another one for  GHOST RIDER: SPIRIT OF VENGEANCE

•  People like it! The Rock! Ninjas on rocks! Bruno? WTF?  G.I. JOE: RETALIATION

•  That Will Smith, he's adorable! Stick to what ya know, right? MEN IN BLACK 3