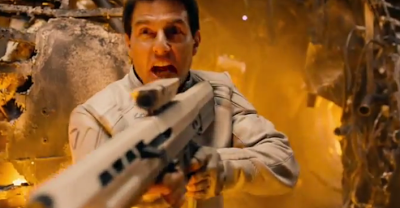 Earth's last days are upon us!

Two trailers have popped up in the last few days and the similarities between them have me thinking we need a little head to head. The recipie cooking away here is relatively familiar as is much of Hollywood's output: One big action star, one upcoming actor, Sci-Fi, a desolate and dying Earth, and mysteries! Ooooooo. Let's take a look!


Up first, AFTER EARTH. Will Smith and his son Jaden Smith (oddly enough playing his son), in a vibrant and lush looking film directed by M. Night Shyamalan. There's only one twist in this trailer and I already gave it away by telling you the name of the movie. Oops.

While the above movie seems to be more about life and its harsh lessons being taught against the contrast of the beauty of a healing, bountiful world - Tom Cruise's OBLIVION is a bit darker as the title implies in this. Directed by Joseph Kosinski the hero here stumbles upon things he wasn't supposed to know...

Aside from the initial similarities in concept, these films seem to be very different animals. While each has action elements to them, Oblivion with more bullets flying, After earth with better livestock, it'll come down to story. And based on what we've seen here, After Earth might just be the one to actually have something to say.

Funny how on the precipice of "our last days" (Damn you Mayans!) we are presented with trailers for two films that feature the Earth as dead as Sea Scrolls. Hmmm. Coincidence or attempted marketing genius?

Are you excited for either? Both? Neither?

Email ThisBlogThis!Share to TwitterShare to FacebookShare to Pinterest
Labels: Movies