Welcome to the DC TV Report for the week ending Saturday July 31st, 2021. I'm here to bring you recaps, news and commentary for all live-action television shows based on DC Comics. There were no new episodes this week so I have a retro pick.

Steel - Released 8/15/1997 1) John Henry Irons left the Army after an advanced weapons demonstration went wrong and returned to live with his grandmother and little brother in Los Angeles. 2) Nathaniel Burke, the disgraced jerk who botched the weapons demo, stole the sonic weapons and brought them to an LA gang so he could showcase them to underworld buyers. 3) Johnny busted his parapalegic friend Susan Sparks out of a VA hospital and brought her to his uncle's junkyard so she could build him armor and weapons to save the neighborhood from Burke. Last Minute Reveal: Sparky showed off her new wheelchair at the grand opening of Grandma's restaurant and gave Johnny a big hug!

Many moons ago and long before he began spending his nights arguing with Charles Barkley on TNT, Shaquille O’Neal attempted to be a type of triple threat rarely seen in the world of entertainment. Being a generational basketball talent was not good enough. Shaq wanted to be a rap artist and a movie star on top of that. I cannot speak for his music career but the flick that served as the nail in the coffin of the Big Aristotle’s time as a Hollywood leading man was the adaptation of a Superman spinoff character I just recapped above. For the past quarter century Steel has been a mainstay on most lists of the worst superhero movies ever made. However, I just watched it for the first time and I do not think it is all that bad. 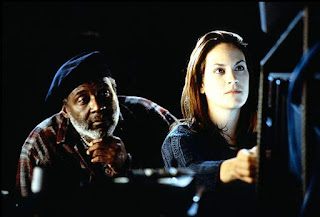 The cynical way to think about how this film got made would be to say that Warner Bros. sat Shaq down in a conference room, showed him a lineup of characters and then he pointed at Steel and said that one. While that may or may not be true, it cannot be said that the effort behind making this film was half-cocked. Writer/Director Kenneth Johnson had been THE name in superheroes on television in the 1970s and ‘80s, bringing The Bionic Woman and The Incredible Hulk to the small screen. The supporting cast included Annabeth Gish, Richard Roundtree and Charles Napier, who all deliver solid work. Ironically the $16 million budget forced the production to rely more on practical effects that I believe hold up much better today than CG smothered action picks that were released a few years later.

In the end, it seems that the biggest mistake made with this film was releasing it in the wrong medium and targeting the wrong audience. Essentially, this movie was made for young kids. The marketing tried to draw in the teenaged and older superhero fanboys, who smelled a rat and did not see it. There are a bunch of corny jokes laden throughout the film but there is a homespun sincerity to the story that feels right at home in a kids movie. If this had debuted as a movie-of-the-week or as part of the Wonderful World of Disney, modern fanboys would be shaming people my age (I was nine when this was made) defending this movie with the zeal of a medieval crusader. Instead Steel was put on over 1,200 screens and could not even gross $1 million opening weekend.

To put it simply, if you enjoy superhero films from before the Marvel revolution, give Steel a chance. It is currently available on HBO Max and while it is not great (or even objectively good), it just might put a nostalgic smile on your face.

Ed’s Winner for the Week:  Shaquille O'Neal - It seems like the entire Hollywood-Industrial Complex conspired to make this movie fail and make sure Shaq stuck to basketball for the next decade. I feel like that is our loss.

Legends of the Tomorrow: The Mixtape Is Coming