We here at the Wicked Theory Institute have spent the last several months compiling endless data, crunching unfathomable number strings, charting numerous alternate realities and scouring this new fangled Instanet, to bring you a shockingly new, (non)regular feature. We call it: The Big Bad List. No set number of entries (because this ain't Worldwide Pants), listed in no particular order (because "random is the new black") and mostly comprised of our personal favorites (because we're narcissists) here now, we present our first BBL:

In the vernacular,"Doppelgänger" has come to refer (as in German) to any double or "Look-Alike" of a person—most commonly an "evil twin". The literal translation of the German word is "double-walker", meaning someone who is acting (e.g. walking) the same way as another person. - -Wikipdeia 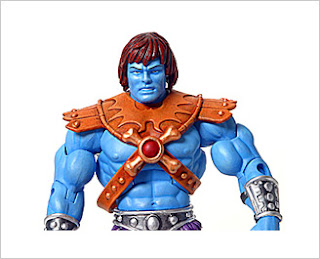 Our theory is somebody was drinking at the factory and slipped too much Blue #7 into the machine and bungled themselves into a million dollar idea.

Can't you just see it:

....or perhaps it was just a bad dose of Eternian steroids ( bought on the cheap from Orko).

For many of Americas, 30-ish aged, this may have been one of the first Dopp to cross their path, But some things about this figure never made sense. Firstly, lame-o here only got one episode - for that he gets a toy? I don't remember He-mans parents being immortalized in plastic - and they were weekly regulars! Second, on the show he was a flesh toned, magically created dupe of The Master Of His Own Universe. But the toy was a smurfy tinged robot? Ok, right, we get it. He's blue because if he was flesh toned, then it would be hard to sell it as a truly different figure. But an Orange Sword and Armor? Burgundy hair? Something Is SSSSssteamingly odd about his wardrobe.

According to his wiki entry there were other, somewhat cooler, incarnations of this character that appeared in comics and the few attempts to reboot the TV series.

Perhaps one of your Saturday mornings was spent watching Challenge of the Superfriends and wondering why this dangerous pea-brain was even allowed into the Legion of Doom. Surely he was constantly leaving the door open, knocking things over, forgetting to flush (or even wipe), playing far too rough with Luthor's puppy Lil' Crisis, etc. Sorry, but no, we don't see him as "MTV Real World" housemate material.

A version of Superman from a mirror dimension that is both backwards and upside down, he speaks in a backward manner and is basically a pasty-skinned, mentally deficient 6yr old with the same powers as Supes, although in certain reboots, he has possessed the opposite powers.

On Smallville, Bizzy-Boy popped up, but was quite different than past versions. Perfect grammar for one thing, boyish-good looks for another:


This is much more classy - with an alternate ending!


Wow. That reminds us of the time tha--

We interrupt this Big Bad List to propose the age old question:

Who has the better Goatee?

We now return you to The Big Bad List, already in progress...


--inet! And that's why we're not allowed in Massachusetts anymore, but we digress.)


The current incarnation of Battlestar Galactica is a show that has humans at war with a legion of machines that evolved and are, essentially, clones. It is the retrograde mother of all "evil twin" concepts and the writers love to zig, when you think they're going to zag. So, that said, we could show almost any clip, so instead we'll give you a season 3 teaser:

So what do you do if your city destroyed every summer by a skyscraper-sized, electro-fire breathing reptile? Well, if you're like Japan, and have Cyberdyne on retainer, you build your own giant anti-Monster of Mass Destruction. From steel.

The Dukes of Hazard had twin cousins (twizens? Or coustins?) move into their house while the boys were away at summer camp, so that doesn't quite count.
The A-Team had some team of impostor's running around, none of whom could shoot an AK47 very well either, but again, they weren't "copies".
Smufrette was created by Gargymel, but she "worked something out" with Poppa Smurf and he made her real-- and she wasn't a copy of anyone anyway.

Besides, we all know Smurflegangers don't count.