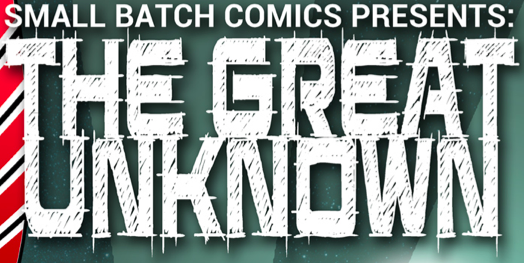 Small Batch Comics is a new, creator owned, non-profit comic publisher featuring only the work of previously unpublished talent. Born from one of the many sub-levels of the vast and growing structure that is Reddit. com, this new indie voice has a clear message and ideal that could have only sprung from our current times of wide spread technological socialization and collaboration. It's a bold move in this uncertain comics market, but bravery and earnestness are rare and should be rewarded.

Enough about them (you can learn more about them here and submit your own stuff here), let's take a look at their first book, THE GREAT UNKNOWN,  a FREE an anthology that seems to have a bit of everything from Nazi Scientists to Ancient Astronauts to Deep Space Action... 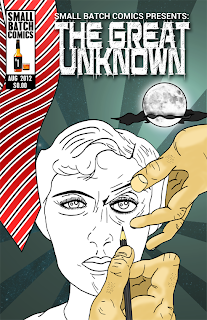 This is an indie book by first timers and the cover alone should tell you everything you need to know: mainly that this is not a super-slick book from the Big Two - the art is going to vary - and also that things are probably gonna get weird. And they do. In the best ways possible. Most of the stories are pretty damn good, seven in all, and the art holds up well for almost all of them.

Overall, I wanted the book to be longer. I felt a raw, unpolished freshness from the book that was almost palpable. Whether they be slight or great, each tale was charming and memorable, regardless of their roughness. Fun and smart, with twists spread throughout, the book is worth your time.

So, what are theses stories? I'll try not to give too much away... 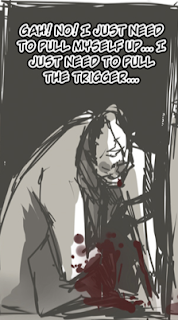 A frantic, smart little tale that starts with gunshot as a unnamed Nazi scientist takes a hit from an unknown assailant. A gunman now loose in the lab.

Who is the gunman? What does he want? Does the doctor have enough time to finish his greatest project ever?


A super-short tale with a witty end, the scratchy, rushed feel of the art grew on me and became a way to feel the characters confusion and distorted view.

A tale of an alien warrior visiting a tribe of desert people with more than a passing resemblance to ancient Egyptians.

With a penchant for the brutal and blunt, this warrior carves up his challengers while offering us a helping of cooking metaphors. 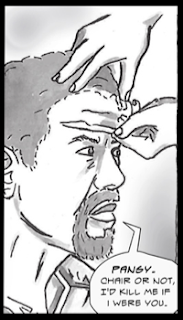 A brief peek into a testing program trying to rewire the darkness that is in the mind of monsters. Real monsters mind you, not mermen and werewolves.

The story works well because of it's swiftness. The tension ramps quickly and what seems to be, may not, as the ending abruptly arrives with interesting fashion.

This is a tale that can be broadly expanded on and it reads like just the beginning, an opening scene perhaps, of something much bigger. 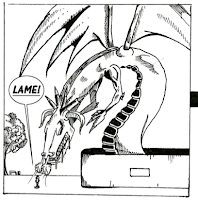 This story, more than any other in the book, is held back by the art that accompanies it. It is just a fantastic and strange as anything else to be found within and fits in well with it's tone and ideas.

The artwork though, as playful and cartoony as it is, needs more to it. The sense of childish fun is conveyed nicely, but backgrounds are sparse, if not forgotten, and characters are stiff. 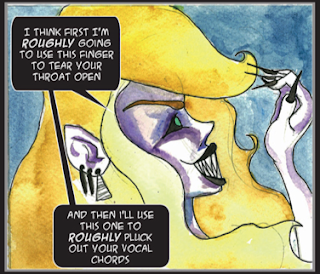 A comedic trip through the woods of a fantasy realm where two witchy gals just wanna, do gal stuff. Y'know, like, ritual sacrifice and stuff.

The gals are being followed by hunters and soon things get blown out of proportion. Literally.

The watercolor work is a nice, bright departure from the rest of the book and lends something to the Ye' Olde tones of such a tale. 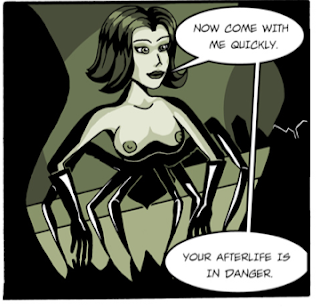 When Todd is killed under highly ironic circumstances, he finds that he was wrong about the afterlife. It's there. Waiting for him.

With Tim Burton-esque creatures abound the feel here is delightfully madcap. Our hero finds help and comes to an understanding about his place in the afterlife, his death, and who should be held responsible.

He becomes a man with a mission by stories end and I for one, would like to follow him on that journey. 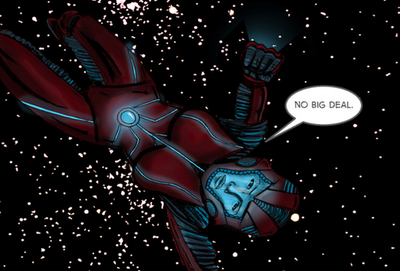 In the last story, we meet Jenn and her robot, Tonic, as she is "pulled back in" from hiding in plain sight as a mechanic. It's not really working out for her, so when the offer comes to track down the source of the "Ghost Plauge", she jumps.

But what madness lies in a space-lab, awaiting her discovery?

The most "professional" looking story of the bunch, it pacts an unsettling end.


The book is peppered with reallllly great joke ads throughout and wraps up with a Guest Column by Chris Robertson where he discusses and displays a "Comic Creator's Bill Of Rights". This is a really fun book, deeply devoted to the creators and industry of comics and it deserves your attention.

Did I mention it's free?