Welcome to the DC TV Report for the week ending Saturday February 27th, 2020. I'm here to bring you recaps, news and commentary for all live-action television shows based on DC Comics. There were 3 new episodes this week including a series premiere. 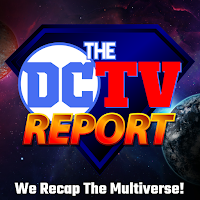 Batwoman - S02E05 "Gore on Canvas" 1) Ryan's distrust of the Crows made her extremely reluctant to work with Sophie and Jacob to track down a painting done by Jack Napier that allegedly held clues to finding Kate. 2) Ryan was happy to be back with Angelique but ignored the growing pain from her Kryptonite wound. 3) Alice tracked down Ocean and decided to make contact with him before attempting to kill him for Safiyah. Last Minute Reveal: While driving off into the night together, Ocean showed Alice the Napier painting!

Black Lightning - S04E03 "The Book of Reconstruction Chapter Three: Despite All My Rage..." 1) Jefferson and Lynn each seperately stopped worrying about Tobias and worked out their personal demons. 2) Jefferson learned a co-worker was making extra cash fighting in virtual cagefights set up by Lala. 3) Jennifer got upset with a fake news story about Lightning and decided to take control of her own narrative. 4) Gambi swiped a next gen DEG from Monovista and asked TC to help him analyze it. 5) Grace woke up from her coma! Last Minute Reveal: Jefferson saw Lynn and Tobias dining together at a fancy restaurant and walked out in disgust!

Superman and Lois - Series Premiere Pilot 1) After Clark Kent was layed off by the Daily Planet, Superman and Lois returned to Smallville for Martha's funeral. 2) The Kent boys, the confident, athletic Jonathan and the troubled, anxious Jordan befriend Lana Lang Cushing's daughter Sarah and had trouble resetting a router. 3) General Lane pulled in Superman to help stop a series of attacks on nuclear power plants. Last Minute Reveal: The Armored Stranger returned to his base in the mountains and his computer called him Captain Luthor!

Ed's Winner for the Week: The World - Superman is back on television and he isn't bursting with angst or insecurity. Even when he isn't sure of himself, his humility and maturity are inspirational. Superman is back and the world needs him now more than ever.

DC's Stargirl: Season 2 Confirmed for Summer 2021 on The CW