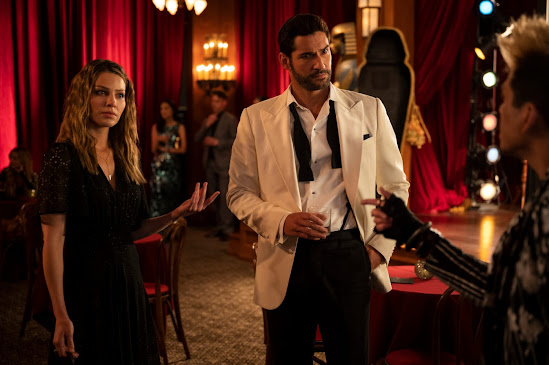 Welcome to the DC TV Report for the final season of Lucifer. I'm here to bring you recaps, news and commentary. There were 10 new episodes this week including a premiere, a penultimate and a series finale.

Lucifer - Season 6 Premiere "Nothing Ever Changes Around Here" 1) Lucifer and Chloe's supposed last night on Earth was ruined when the Magician they paid to see fell on stage, slain with his own sword. 2) During a dinner party, Dr. Linda could not help but play therapist for Maze and Eve. Last Minute Reveal: As Dan continued playing ping-pong in Purgatory, a woman in fishnet stockings and platform boots sat on the Throne of Hell!

Lucifer - S06E02 "Buckets of Baggage" 1) Lucifer decided to start learning to help people he doesn't care about by helping Detective Carroll get laid while he was investigating the murder of drag queen. 2) Ella's Pete TSD made her try digging up Carroll's dark secrets. 3) Chloe was feeling restless in retirement and tried picking a fight with Maze. 4) An angel with bloody wings began walking the halls of Hell looking for clues on how to take down Lucy. Last Minute Reveal: A frog seemingly landed from nowhere onto the hood of Ella's car! 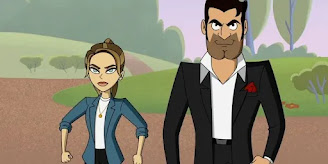 Lucifer - S06E03 "Yabba Dabba Do Me" 1) Chloe joined Lucifer on a trip to Hell to check on the first murderer they locked up together and wound up trapped in a cartoon. 2) Maze crashed Amenadiel's first day as a trainee. 3) The angel with bloody feathers and blades in her wings brought Dan's ghost to Lucy's loft and waited for him to get home. Last Minute Reveal: The Angel confronted Lucy and told him she was his daughter!

Lucifer - S06E04 "Pin the Tail on the Daddy" 1) Lucifer began flying around the country trying to prove the bloody-winged Angel was not his daughter. 2) Chloe caught up with Lucifer, furious that he was keeping secrets. 3) Dan wandered around LA as a ghost, unable to be seen or heard by humans. Last Minute Reveal: Lucifer's daughter surprised Chloe with a hug and called her Mom!

Lucifer - S06E05 "The Murder of Lucifer Morningstar" 1) After their daughter Rory claimed Lucifer would abandon Chloe in 3 weeks, the couple tried solving the mystery of his disappearance before it could happen. 2) Maze became insensed after Rory did not recognize her and called Eve her Auntie. 3) Ella told Amenadiel her suspicions about a coming Apocalyse. Last Minute Reveal: Dan got to tell Chloe she was the strongest person he'd ever met and left her crying tears of thanks! 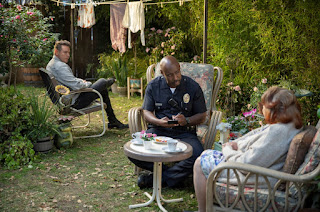 Lucifer - S06E06 "A Lot Dirtier Than That" 1) On Amenadiel's first official day on the job he found himself working under the cop who almost shot his friend Caleb. 2) Lucifer tried making up for lost time with Rory by recreating childhood milestones. Last Minute Reveal: Rory and Lucy sang "Bridge Over Troubled Water" together!

Lucifer - S06E07 "My Best Fiend's Wedding" 1) Lucifer tried encouraging Rory to attend Maze and Eve's wedding. 2) Wedding plans were in jeopardy when Adam showed up asking Eve to come home. 3) Chloe wanted to come out of retirement to help Amenadiel clean up the department but had second thoughts after realizing how it might affect Rory. 4) Dan was bummed out he couldn't help Ella with whatever was bothering her. Last Minute Reveal: After Ella got drunk on mic at the reception, called out all the angels and demons in the room for not telling her the truth and revealed that the world was ending, Carroll got back from the bathroom, wondering what he missed! 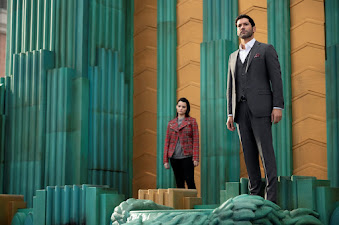 Lucifer - S06E08 "Save the Devil, Save the World" 1) Lucifer brought all his friends to Lux to comb through the manuscript of Dr. Linda's book to try and figure out the psychosomatic reason he could not spread his wings and fly up to Godhood. 2) The scenes from the book began as caricatures of everybody and slowly turned into a clip show. 3) Maze offered to help Dan figure out his guilt problem. 4) Ella made it well known she was still royally pissed about being kept in the dark for years. Last Minute Reveal: Amenadiel returned from the Silver City and told Lucifer they needed to talk! 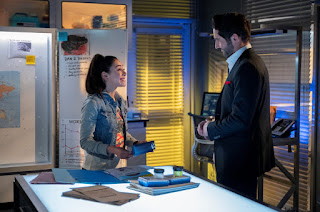 Lucifer - Series Penultimate "Goodbye, Lucifer" 1) The day Rory predicted Lucifer would abandon Chloe had arrived and Lucy pondered the idea of free will vs. fate, told his favorite people how awesome they were, and enjoyed a wonderful day with his family. 2) Dan's ghost witnessed his murderer, Vincent Le Mec, escape prison and found a way to take posession of his body. Last Minute Reveal: Midnight came and Lucifer was still on Earth but he got a call from Le Mec, who regained control of his body after Dan earned his way to Heaven, kidnapped Rory and was holding her at 10th and Swanson!

Lucifer - Series Finale "Partners 'Til the End" 1) Lucifer and Chloe went to 10th and Swanson together to rescue Rory from Le Mec. 2) Rory helped Lucifer realize his calling. 3) Amenadiel took control of the Silver CIty and all of Lucy's loved ones lived full lives on Earth. Last Minute Reveal: Chloe knocked on the door of Lucy's therapy session in Hell, offered to be his partner and kissed him!

Ed’s Winner for the Season:  Lucifer Morningstar (Tom Ellis) - Knowing that this series was originally intended to end last season made me somewhat skeptical about this one. Theoretically, the show's writers were given ten full episodes to accomplish something they thought they could achieve in the last act of an episode. I am so thankful they got that extra time because it allowed for Lucifer be introspective and figure out what he really wanted. The show shifted from a classic procedural into a character study. In fact, the final two episodes were pretty much one long goodbye. Some may call it self-indulgent, but they cannot deny that it was a fun and emotional journey with an old friend.