Welcome to the DC TV Report for the week ending Saturday September 4th, 2021. I'm here to bring you recaps, news and commentary for all live-action television shows based on DC Comics. There were 4 new episodes this week including 1 penultimate. 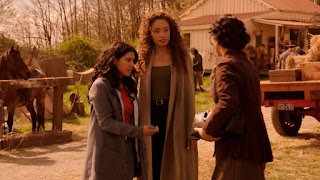 DC's Legends of Tomorrow - Season 6 Penultimate "There Will Be Brood" 1) After being stranded at the House of Secrets, Sara and the Legends called on Kayla to help them find the Waverider and rescue Mick's eggs. 2) Constantine shared his magical map with Bishop and the pair piloted the stolen Waverider to 1925 Odessa, Texas in hopes of locating the Fountain of Imperium. 3) Astra and Spooner stowed away and discovered Spooner's mother alive and working as a healer in the oil town. Last Minute Reveal: Zari and the Legends reached the dried out fountain just as John said goodbye to Astra, got swallowed up by roots and shrivelled to nothing!

DC's Stargirl - S02E04 "Summer School Chapter Four" 1) Sportsmaster and Tigress broke out of prison and asked Pat to give them a pass so they could watch Tigress tryout for football. 2) Courtney and friends had to go to the library and find hard-cover books to learn more about Eclipso. 3) Cindy carried aroung the Black Diamond and began gathering new recruits for her new evil team. Last Minute Reveal: The real Dr. Charles McNider walked in the shadow realm calling out to Beth! 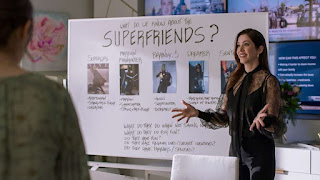 Supergirl - S06E09 "Dream Weaver" 1) Kelly started her job as a social worker and met a 10 year-old alien boy who was worried that his brother was being abused in prison. 2) Kara and J'onn looked into a series of robberies and found links to an alien prisoner work-release program. 3) Andrea charged Kara and William with landing interviews with the "Super Friends." 4) Nia was approached in her dreams by Nxly, who offered to bring Nia's Mom back to life for a day in exchange for access to the real world. Last Minute Reveal: Nia ignored the wise owl and decided to take Nxly up on her offer! 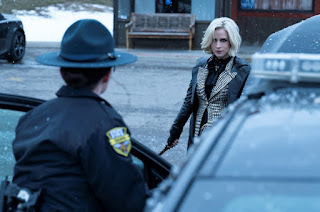 Titans - S03E06 "Lady Vic" 1) Dick thought back on his thieving teenage year with Barbara as he went behind her back to help investigate a slaughter committed during a brain surgery by a platinum blonde with a samurai sword. 2) Kory threw her hands in the air, clueless about what to do with her elitist, revolutionary sister. 3) Scarecrow hired the assassin Lady Vic to do some dirty work in Gotham and demonstrate to Jason that he was expendable. Last Minute Reveal: Jason watched a junkie high on the antidote shoot up Tim Drake's family noodle shop, inhaled another hit and walked away!

Ed’s Winner for the Week:  Reunions - Characters in all of our shows this week experienced reunions both happy and unhappy. Spooner got to meet her mother again on Legends. Supergirl got to reunite the orphaned alien Joey with his brother Orlando. Stargirl briefly allowed Sportsmaster and Tigress to watch their daughter play quarterback. Finally on Titans, Lady Vic strolled into Gotham and got to take another swipe at Barbara.

Brenton Thwaites on 'Titans' Season 3, Dick and Barbara's Relationship, and What Lies Ahead for the Team vs. Red Hood

Everything Confirmed for DC FanDome 2021

Y: The Last Man’s showrunner has a plan: five seasons and a monkey