Welcome to the DC TV Report for the week ending Saturday September 25th, 2021. I'm here to bring you recaps, news and commentary for all live-action television shows based on DC Comics. There were 7 new episodes this week including 1 premiere. 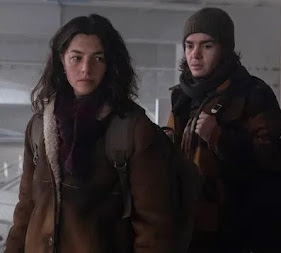 Y: The Last Man – S01E04 "Karen and Benji" 1) Yorick and Agent 355 had a rough time adjusting to life on the run in the woods together. 2) Hero and Sam were still of two minds about heading to DC when they encountered Nora and the injured Mackenzie hiding in an empty Pharmacy in Pennsylvania. Last Minute Reveal: After Hero and company were allowed to stay with the horse riders by their leader Roxanne, Nora warned Hero not to reveal who her mother is and the ladies walked into a wholesale store filled with food! 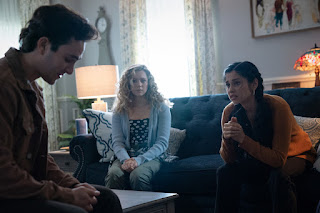 DC's Stargirl – S02E07 "Summer School Chapter Seven" 1) While everyone was still reeling and healing from their encounter with Eclipso, Courtney tried taking some time off to help Cameron decorate Main Street for 4th of July. 2) Yolanda's guilt and visions of Brainwave reached a breaking point. 3) Pat preached patience as he let Mike help repair the wrecked S.T.R.I.P.E. Last Minute Reveal: Beth tossed and turned in bed while little boy Eclipso stood on her front lawn, sucking a lollipop and giggling! 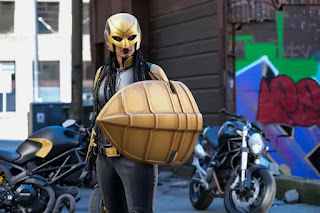 Supergirl – S06E12 "Blind Spots" 1) Kate was upset that people who survived Nxly's destruction of the Ornfeld building were getting unusually sick and it seemed like no one was trying to help them. 2) Councilwoman Rankin received 5th Dimensional powers and began leeching life energy from people so she could achieve her selfish goals. 3) Everyone at the Tower was preoccupied trying to track down Nxly. Last Minute Reveal: After Kate said she was too tired to speak and Alex offered loving support, the couple embraced and cried together on the couch! 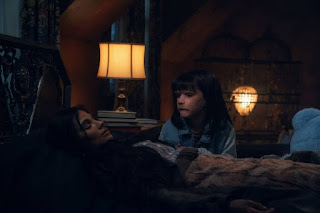 Doom Patrol – Season 3 Premiere "Possibilities Patrol" 1) After banishing the Candlemaker away, Dorothy hung around the Manor, praying and hoping Niles or Jane would wake up from their slumbers. 2) Niles' ghost visited Cliff and told him he reached out to Clara in hopes that Cliff would incinerate his remains and free his spirit. 3) Rita tried ingoring her grief until she found a key that Niles left for her to take care of. 4) Larry fought with his Negative spirit to stay at the mansion because he felt he had a responsibility to do so. 5) Vic discovered that Roni was planning a violent revenge against Quorum. 6) Jane was trapped in the Underworld as the infection calling herself Miranda paralyzed Kay's mind and body. Last Minute Reveal: Willoughby Kipling dug up Niles head in the Yukon and packed it in a duffle! 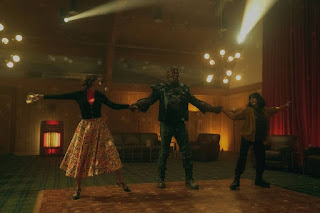 Doom Patrol – S03E02 "Vacay Patrol" 1) In 1949, the Brain sent Garguax the Decimator and his loyal assistant Samuelson on a mission to a mountain resort to wait for Rita Farr to show up. 2) More than 70 years later, Rita had fallen to mush and decided that she and the rest of the group should go on vacation. 3) Cliff did not want to admit that he might be suffering from a neurological condition. 4) Vic's networking powers were shut down after he let Roni go free. 5) Jane was having a hard time adjusting to the new Underground. 6) Larry's Negative Spirit brought him to its home in deep space. Last Minute Reveal: After Rita was betrayed by an older version of herself, Samuelson laid out the bodies of Garguax and the Doom Patrol around the dance floor! 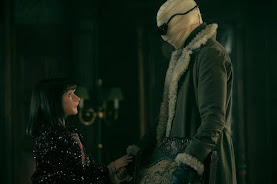 Doom Patrol – S03E03 "Dead Patrol" 1) After crossing to the other side, Rita was the only team member awake, hanging in the Tunnel of Souls. 2) Cliff, Vic and Jane each met deceased loved ones on the way to their afterlives. 3) Dorothy came home to find Larry had gone stircrazy after the others' bodies had been delivered and called in the Dead Boy Detective Agency for help. Last Minute Reveal: A mysterious woman descended the stairs and offered the Doom Patrol tea!

Titans – S03E09 "Souls" 1) The recently deceased Donna and Tim escaped a train to the next place and met up with Hank to look for a bridge back to the living. 2) On Paradise Island, Rachel was punished for trying to use her powers to bring Donna back to life. Last Minute Reveal: The resurrected Donna pulled Bruce Wayne out of his suicide fire!

Ed’s Winner for the Week:  Dealing with Death - Most of our shows featured characters facing or experiencing death. On Y, Hero and Sam were not able to help poor Kate survive her injuries. Yolanda on Stargirl was overcome by the reality that she killed Brainwave. Plus, members of both the Doom Patrol and Titans literally escaped the afterlife.

Y: The Last Man's Ben Schnetzer Explains Why Yorick's Road Trip Will Be So Transformational

Titans star on character's 'beautiful' exit: 'The decision was made for me, and it was for the best'

The Flash Showrunner Teases Major Storyline for Iris in Season 8

The Sandman: First Look at Netflix's Adaptation Arriving This Weekend