Welcome to the DC TV Report for the week ending Saturday October 2nd, 2021. I'm here to bring you recaps, news and commentary for all live-action television shows based on DC Comics. There were 5 new episodes this week. 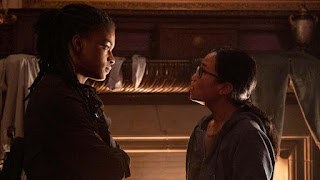 Y: The Last Man - S01E05 "Mann Hunt" 1) Yorick and Agent 355 reached Boston and had to avoid soldiers and insurgents while searching for geneticist Allison Mann. 2) Jennifer was nervous, prepping the White House for the return of Secretary Oliver. 3) Kimberly Cunningham discovered that staffer Christine Flores was pregnant and helped her through a miscarriage scare. Last Minute Reveal: After lying to Yorick about speaking with his mom, 355 checked her bag to make sure her Fran tracker was blinking! 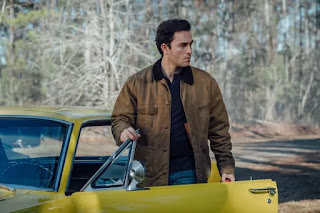 DC's Stargirl - S02E08 "Summer School Chapter Eight" 1) On the 4th of July, Rick was forced to call for help when he heard that hunters were going into the woods to take out Grundy. 2) Beth's efforts to contact Dr. McNider were interrupted when Eclipso began appearing to her. 3) Courtney was bummed out after Yolanda quit and anxious that Cosmo was taking so long to heal. Last Minute Reveal: As Barbara and Mike hugged each other to feel safe, the window outside began to frost over and icicles began forming under the rain gutter! 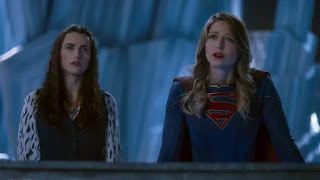 Supergirl - S06E13 "The Gauntlet" 1) After David's slingshot, the totem of courage, was pulled apart, Kara and Nxly each ran gauntlets to try and gain control of the totem while pure courage began to permeate everyone around them. 2) Lena was in denial about the whole "Mom-was-a-witch-and-so-am-I" thing. 3) Dr. Beatrice Lahr became emboldened to steal research data on Project Bolt after her funding was cut. 4) William was down in the dumps after getting chewed out by Andrea for dropping the ball on the Super Friends story. 5) Kelly and Alex had an awkward breakfast talking about balancing the hero stuff with their relationship. Last Minute Reveal: Nxly came to the conclusion that pain was the price of power and became confident that she would succeed in finding the totems!

Doom Patrol - S03E04 "Undead Patrol" 1) The mysterious woman told the Doom Patrol she had suffered from amnesia but knew she had to find Niles Caulder and needed her time machine repaired. 2) All of our recently resurrected heroes slowly got sick and turned into zombies. 3) Darren Jones stole Niles' enchanted head from Willoughby Kipling and demanded retribution. Last Minute Reveal: A zombified were-butt began running full speed toward Cloverton! 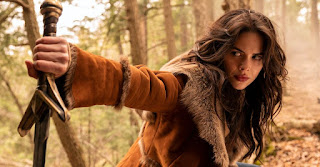 Titans - S03E10 "Troubled Water" 1) Both Barbara Gordon and the Titans found themselves in a quandary after Scarecrow posted a video claiming it was Nightwing who poisoned the water and that the city should rally around Red Hood. 2) On her journey to the Gotham CIty limits, Donna was confronted by Lydia and forced to take a vision quest. Last Minute Reveal: After strolling into the living room of Wayne Manor, Scarecrow stretched out on the couch with a bottle of Scotch while Jason slashed up a portrait of Bruce and his parents!

Ed’s Winner for the Week:  The Butt Monsters - I was trying to pull a theme together about women returning home but this week's Doom Patrol just broke me. Legends of Tomorrow has always been regarded as the bonkers DC series but the fact that Doom Patrol airs on a streaming service instead of a broadcast network allows it to reach a whole new level of strange and deranged. The episode "Undead Patrol" just hit a new high point. The legion of shark-toothed "were-butts" as Jane called them were the exact type of absurdism that the world needs right now. I know the concept is terrifyingly stupid, but somehow its very existence gives me faith in humanity.

The tricky trans politics of FX’s Y: The Last Man

The CW Announces Finale Dates For Supergirl and Stargirl